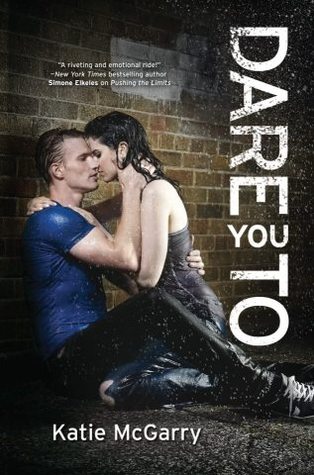 Beth Risk’s life has never been a happy one, especially not since third grade. She knows that if anyone finds out the truth about her mom, prison is where her mom will go and Beth will get stuck in foster care, ripping her away from her friends and what little family she has left. Unfortunately for Beth, some things are out of her control and soon she is ripped out of that life by her uncle and forced into a school and town where no one accepts her and all she can do is fight to get back to where she was. Ryan Stone is the epitome of Golden Boy. He is the star of the baseball team, popular, and the son of a well-off business owner. Ryan, however, is hiding a big secret. A secret he dares not even tell his closest friends. One night his friends dare him to ask for the dark skater girls number and what starts out as a bet, becomes so much more.

Beth is everything I remember from Pushing The Limits and more. McGarry really knows how to write a tortured character who keeps on fighting, despite the odds. Her fierce loyalty to her mother, despite all evidence that she should let it go is both inspiring and tragic. It’s obvious to everyone that mommy dearest is beyond help, but Beth just keeps on trying. When her uncle Scott drags her kicking and screaming away from that life, she is utterly angry and resentful. Scott has no right to interfere. Scott left her years ago and never came back. Scott can kiss her ass as she walks back to Louisville, where her mom and the rest of her life is. Scott sets down an ultimatum. Live in his house and by his rules or he’ll turn in the dirt he has on her mom, sending her to prison for too many years. Watching Beth buck convention while still trying to obey Scott’s rules bordered on heart-breaking. Her past is so fucked up and you can really see where all of her bad tendencies stem from. At the same time, she’s bright and spunky and so damned stubborn that she refuses to see what’s right in front of her. Ryan’s the hot jock and she knows he is playing her, she just can’t figure out the angle yet.

Ryan wasn’t an insta-love character for me. Initially I didn’t like him much, but he grew on me a bit. The more you learn about his home life, the more you pity the kid. Sure, it’s not as terrible as Beth’s past, but that doesn’t mean it’s easy to cope with. Baseball has always been his dream, but lately he has been wondering if maybe college ball is the place for him instead of going straight to the pros after high school. Beth is his opposite in every way. She’s loud, foul-mouthed, and enjoys shocking people. He has to give her credit for never backing down, but the harder he fights to get her number and win the bet, the more he realizes that maybe there is much more to her underneath that punk façade.

So, here’s the deal. Dare You To was almost as great as McGarry’s previous novel. Beth is an entirely captivating leading lady and Ryan is perfect for her in ways that I don’t think the two will every understand. The storyline, and learning more about Beth’s history was mesmerizing. So why only four stars? Well, the biggest reason is Isaiah. I read somewhere in an interview with the author that Beth and Isaiah aren’t going to end up together because they don’t challenge each other and we want to see them get out of the bad situation they are both in. I get that, especially after reading this, I do. Beth would never have gotten away from her mom without this massive force and things truly do improve for her. BUT I still wanted her with Isaiah. The way the entire thing with Isaiah is handled really bugged me. I know he gets his own story next and we’ll see that he is better off, but right now, all I can see is the disappointment in those sad grey eyes as Beth tells him she doesn’t love him like that.

The other issue is a completely inane one, so feel free to skip this paragraph. It is established early on that Ryan drives a Jeep. We never get a description beyond that, so I assume it was a Wrangler.

Maybe it’s just because I actually drive a Wrangler, but any time someone says Jeep without any specification of which type of Jeep, that’s always what I picture. Then he’s driving Beth around and they get to their destination, so he puts the vehicle in “park.” So it’s a automatic, gotcha. I keep reading, my mental picture of the Jeep improving. Then, on more than one occasion, Beth mentions Ryan shifting gears. Um….how? Is it a manual or automatic? Automatics don’t require the gears to be changed manually and manuals don’t have park, so which is it? This may seem stupid and trivial, and I agree that it is, but it REALLY bugged me. Just like most readers, I get that whole movie in my mind thing going once I really get into the story and while sometimes my mind gets the details wrong even with there is description, there are also times when we must fill in the blank and that’s incredibly difficult to do when the writing contradicts itself. Then, even better, when they are playing on rock and in a creek in the Jeep, Beth claims to grab hold of the passenger side gripbar above the door. So it’s not a wrangler? Wrangler’s have a passenger side grip bar on the dash in front of the seat, not above the door. Is she grabbing the roll cage bar? At one point, it’s referred to as a “truck” which really had me literally growling at the words. The different types of Jeeps look incredibly…well different. Is it a Wrangler like I initially believed? A Grand Cherokee? Or are just one of those annoying individuals who thing Jeep is just a synonym for SUV? It’s not. It’s a brand in and of itself. It’s like saying “I drive a Ford.” Car? Truck? SUV? Give me some kind of description! I realize that is not of the upmost importance, but an extra word tacked on to the description could have easily fixed most of the problem.

Beyond my few issues, this was a great read. I realize there are a lot of skeptics out there who, like me, want Beth and Isaiah together regardless of the consequences. To those readers I say, give it a try. Sure, it’s not exactly what you want, but you are left knowing that Beth is in a much better situation and the possibilities for Isaiah are going to improve. What more can we ask for?