I’m excited to show you guys the new cover for Salt & Stone! To match this cover, they are also giving a new cover to Fire & Flood and I’ve got that to show you as well.

What would you do to save someone you love?

In Fire & Flood, Tella Holloway faced a dangerous trek through the jungle and across the desert, all to remain a Contender in the Brimstone Bleed for a chance at obtaining the Cure for her brother. She can’t quit–she has to win the race, save Cody, and then fight to make sure the race stops before it can claim any more lives. In the next legs of the race, across the ocean and over mountains, Tella will face frostbite, sharks, avalanche, and twisted new rules in the race.

But what if the danger is deeper than that? How do you know who to trust when everyone’s keeping secrets? What do you do when the person you’d relied on most suddenly isn’t there for support? How do you weigh one life against another?

The race is coming to an end, and Tella is running out of time, resources, and strength. At the start of the race there were one hundred twenty-two Contenders. As Tella and her remaining friends start the final part of the race, just forty-one are left–and only one can win. 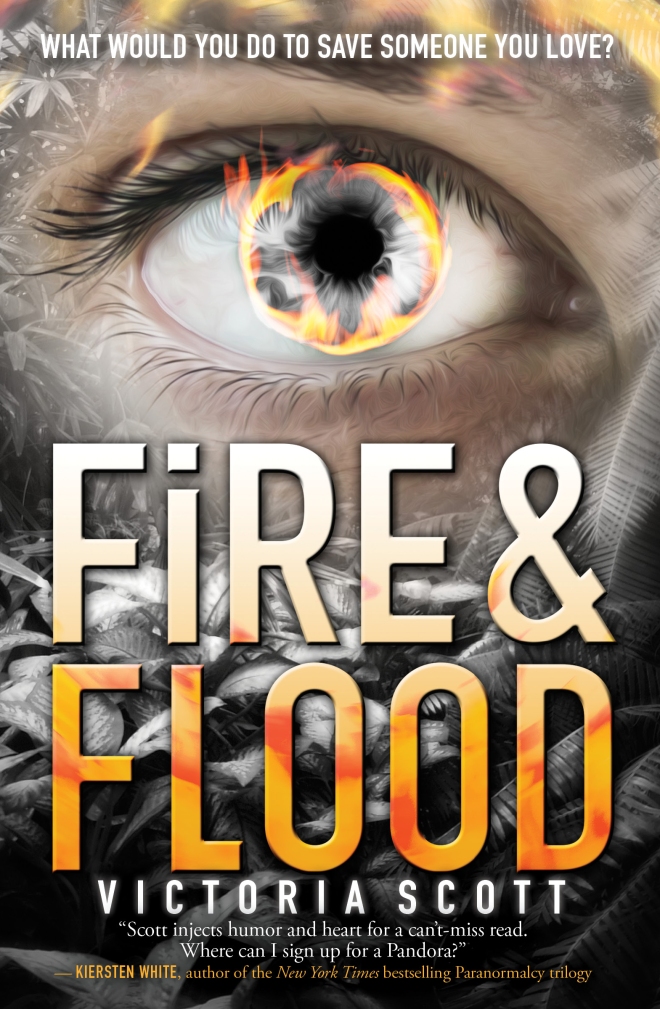 Time is slipping away….

Tella Holloway is losing it. Her brother is sick, and when a dozen doctors can’t determine what’s wrong, her parents decide to move to Montana for the fresh air. She’s lost her friends, her parents are driving her crazy, her brother is dying—and she’s helpless to change anything.

Until she receives mysterious instructions on how to become a Contender in the Brimstone Bleed. It’s an epic race across jungle, desert, ocean, and mountain that could win her the prize she desperately desires: the Cure for her brother’s illness. But all the Contenders are after the Cure for people they love, and there’s no guarantee that Tella (or any of them) will survive the race.

The jungle is terrifying, the clock is ticking, and Tella knows she can’t trust the allies she makes. And one big question emerges: Why have so many fallen sick in the first place?

Victoria is giving away an ARC of Salt & Stone, as well as other books. Click the link below to enter.
a Rafflecopter giveaway Tella Holloway’s brother is sick. He’s deathly ill and the docs say they don’t know what’s wrong or how to fix. Despite their rather smack-talk filled relationship, she loves him to death and can’t imagine life without him, so when a mysterious blue box appears offering her a chance to compete in a competition for the ultimate cure, she doesn’t hesitate. The Brimstone Bleed is a treacherous competition where competitors must fight their way to survive over four different equally deadly planes and every single competitor is out for someone they love. With little to no survival skills, Tella knows her chances of winning aren’t likely, but she has to try. Can she overcome the odds?

I was excited and terrified to start this. Scott claims it’s wildly different than The Collector and I wasn’t sure how accurate that was. I enjoyed The Collector, but it wasn’t my favorite thing in the world and I was expecting this to be about on the same level, great, but not stay-up-all-night-reading amazing. I couldn’t have been more wrong. This is the adventure I was desperately needing without actively seeking it out. On VC’s website she has a blurb by Kendare Blake (If you don’t know who that is, we’ve got problems, k?) that says ““If The Hunger Games and X-Men and some Pokemon had a baby, it might turn out almost as awesome as this. But probably not. Read this book!” and that’s so accurate that it renders me nearly speechless. POKEMON! Perfect, just fucking perfect. I really can’t say anything that lives up to that succinct description, but I’ll do my best to provide something entertaining anyway.

Tella is the best kind of heroine. Initially I sympathized with her while finding her a tad bit annoying. Her parents literally drag her away from her life and then ban any form of electronics…cell phones, tablets, laptops, the works. Being a reviewer and a blogger and active aficiando of wasting hours on the interwebs, I can understand the massive frustration that would entail. I’ll be the first to admit that it would be heaven at first, having an inordinate amount of free time to spend entangled in the magical world that is fiction, but at some point your going to need something else, anything else. Any task gets monotonous after months of doing it repeatedly. But her fashionista-ness was out of my league of interest. After the games start, though, she’s my kind of heroine. Any chick who can manage to maintain her snark even in deadly situations will win my heart. She reminds me a bit of Sophie from Tellulah Darling’s Blooming Goddess Trilogy and that’s a high compliment indeed. Her ability to roll with the punches and still be so fiercely protective of her new adopted family was beyond endearing. Her defense of the Pandoras was another thing that had me loving her to bits. Animal cruelty and abuse is something I cannot tolerate and her determination to protect these creatures and me cheering her on like nobodies business.

They are like Pokemon, but possibly cooler. They all have different abilities and are fiercely protective of their owner, well as long as their owner isn’t a psychotic abusive asshat. Tella’s fox, Madox is probably the most powerful of the bunch and DAMN. Can I have him? I can’t even come up with adequate adjectives to describe their awesomeness.

The other characters are all equally interesting, especially Guy (though he could probably use a better name), who gets to have that whole strong silent type thing going on. Harper had the whole big sister vibe down, and then there was Caroline who I won’t even really comment on because I can’t decide how I feel about her. The later addition of Jaxon provided a great amount of comic relief. He’s quirky and amusing and adorable, following Harper like a lost puppy.

Something else I liked (and maybe disliked, depending on when you ask me) is the brutality of this race. Scott doesn’t shy away from the violent edge a competition like this would inspire. Some contenders are down-right evil, twisted in ways that are shocking and grotesque. Death is also something that has to be dealt with here because conditions like the jungle and desert are difficult to traverse if you don’t know what you are doing. Even if you do, the elements and predators still may catch you off guard. Scott does a great job of straddling the line of cruelty without going so far as to make us feel overwhelmed. Or maybe she makes use feel just the right level of overwhelmed because there is a particular scene where extreme measures must be taken to combat a snake bite and that was overwhelming but somehow it worked well in the setting.

Scott manages to make me adore this even though it has quite a few character deaths. If you follow my reviews at all, you know I hate character death, so that’s quite the accomplishment. She really pushes the questions of how far you would go to save your loved ones. That is the best motivation that you could give and she really pushes the envelope a bit here with just the right level of savagery. This novel has something for everyone, for anyone brave enough to give it a try. It’s got snarky comments galore, a quiet romance, adventure aplenty, and a plot that will surprise most. As with Scott’s The Collector, it’s gloriously free of love triangles and cliffhangers, which would make me love it even if it wasn’t as awesome. But it is! And if you aren’t afraid to get your proverbial hands dirty, definitely give this a read!