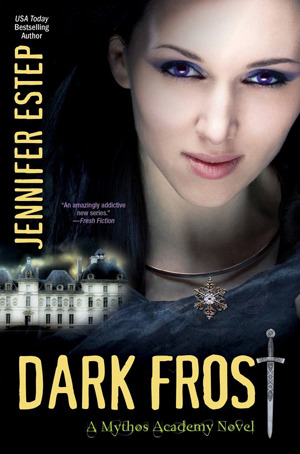 Gwen Frost is on a mission to find the Helheim Dagger, the last mythological artifact the Reapers of Chaos need to open a portal to Loki’s prison and set him free. Her mom hid it long ago and all she knows for sure is that the Reapers believe it is in the Library of Antiquities, though Nickademes swears it isn’t. One thing is certain, things are going to get much more complicated in this installment of the Mythos Academy series.

This novel is everything you would expect from the next Gwen Frost novel. It’s got spunk, mystery, humor, and a good amount of sadness. Gwen seems to be a little down on her game. It’s not so much that I saw exactly what was coming at every turn, but quite a few “big” plot twists were very predictable and our big brave Gwen should have had some sort of inkling that SOMETHING wasn’t right, even if she didn’t know exactly what was wrong. I realize that a good bit of this novel is about Gwen’s failure in a lot of ways, but there were so many clues that she missed it is hard to believe she didn’t catch on until it was too late.

It was also a bit tiresome to watch her and Logan play the on again, off again game. I get there is so much at stake and Logan is scared of her learning his secret and blah blah blah. I’m a bit more tolerant of this types of situations in a fictional setting than I am in real life, but we’ve watched them dance around each other for two entire books now. Either get it on or get over it! What makes it worse is that I KNOW there is so much more relationship drama ahead of me.

These things don’t add up to a terrible novel. In fact, I found a good portion of it amusing, filled with Gwen’s signature snarkiness and good writing that keeps you interested. The reason it gets one star may seem juvenile to most of you, but it angered me and I am a woman of my word. In the last novel, Gwen befriends a Fenrir wolf and I was quite pleased when said beast shows up in this novel. She names her Nott and things proceed in great way from there….until the end. I won’t spoil the rest of the plot, but I will say that the wolf dies. ****SPOILER****Saving Gwen, and isn’t resurrected. She does leave behind a very adorable wolf pup that Gwen will care for, but that doesn’t excuse her death or my statement that I would give this book a one star review if she died. I don’t care about the bullshit answer Nike gives about her being poisoned and dying anyway. To put it succinctly, FUCK. YOU. Oh, and also BULLSHIT. This is a fictional story about war and I accept that certain people will die. I have a hard limit, though, on animals and characters I like being some of the deaths. My rules are simple. None of the main characters can permanently die. Yes, playing the resurrection game can get a little tedious, I mean, just LOOK at Supernatural, but it’s entirely better than the alternative. Repeat after me authors: “I am NOT J K Rowling and I will not kill my characters for no reason beyond my own pettiness.” Got it? Good.****END SPOILER**** Needless to say, that pissed me off enough to downgrade this from the 3 or 4 stars it would have received otherwise.

All in all, this isn’t a bad book. I just find certain things unacceptable and animal death is one of those things. Remember that authors.