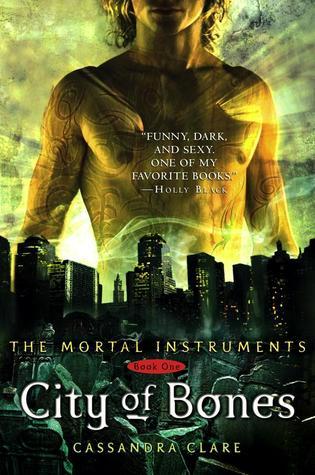 Clary is just a normal girl with a quirky best friend and no clue that there are fairies, vampires, werewolves, and all manner of mythical creatures are roaming the world, until Jace Wayland walks into her life. Once she meets him, everything changes and the jury is still out if it’s for the better or not. Then her mom gets kidnapped and she is thrust into a world were everything depends on finding a mythical hidden item in order to bargain for her mom’s life.

I originally gave this five stars, but then downgraded it because it contains a love triangle and cliffhanger and I abhor those. I’ve seen a lot of hype on the blogosphere lately about the upcoming film and purposely waited until close to the movies release to read this because I knew as soon as I finished I’d be dying to see the film and I didn’t want to have an excruciatingly long wait ahead. I can honestly say that I understand the hype now. I really enjoyed this. It’s got that addictive quality that makes it difficult to put down once you start and that is quite a quality to possess.

As for the characters, I didn’t initially love Clary. She seemed decent enough, but too similar to so many other YA heroines. No Bella Swan syndrome (thank Satan), but nothing about her stood out. Short, slim, flat-chested, artsy, and relatively intelligent seems like a common theme these days. I’m happy to report that by the end, I did come to like her character quite a bit. That whole always fighting for your friends/family no matter what thing gets me every fucking time.

Then we have the main attraction, Jace. If you read my updates, I think it’s pretty obvious that I liked him from the start. There is just something about a hot, cocky, snarky, badass that just never fails to attraction my devotion. He kept me laughing through this somewhat serious book with his one liners and comebacks and complete confidence in his sexiness. And you can’t help but feel for the guy once you learn his back story. Team Jace, all the way.

The other is the other point in this particular triangle. Simon. I sympathized with him from the get go because he’s affection for Clary is rather obvious and I knew she’d never choose him. It’s almost an unwritten rule in the love triangles that they never pick the nicer guy who has always been there for them. Simon’s cute and totally geeky. He’s always ready with a Star Wars or D&D reference and even though I liked Jace more, I do hope Simon eventually finds his happily ever after.

All the other characters were equally interesting, from Luke to Hodge to Isabelle & Alec. I especially enjoyed Magnus Bane. Hodge’s character gets an irritated eyeroll ****SPOILER****because OF COURSE he’s the fucking bad guy, or at least, of course he is working for the bad guy. He’s casting choice for the film alone told me. He’s played by Jared Harris and he’s NEVER a good guy. I felt a little disappointed because that’s a running theme in everything lately, to have the “friend” be the bad guy or the helpful side character. I get it, it’s a good plot line and it keeps you guess, but could be leave it out for a bit?****END SPOILER****

The writing was great, the plotline wasn’t overly original, but it definitely wasn’t the same one we keep getting over and over. What really irked me was the love triangle? Square? Pentagram? For the first half of the book it felt like everyone liked Jace and/or Clary and it got old really quickly. Luckily they are all over it by the end, so we don’t get too much time angsting over it, but it was still annoying. ****SPOILER****The sibling accusation between Jace & Clary didn’t garner more than an eyeroll. I know it isn’t true and even if I didn’t have a little sister who let me in on that secret before I started this, I still would have known. There is too much passion between the two and this series has too many fans for that to be the case. Just no. No Flowers In The Attic for me, thank you.****END SPOILER****

On the whole, this is an immensely enjoyable read and I recommend it to anyone looking for an addictive thrill-ride, with some interesting, if a little predictable, twists.