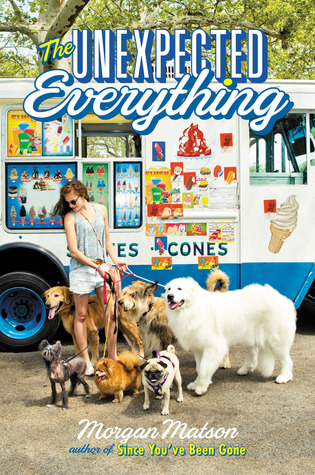 From Morgan Matson, the best-selling author of Since You’ve Been Gone, comes a feel-good story of friendship, finding yourself, and all the joys in life that happen while you’re busy making other plans.
Andie has a plan. And she always sticks to her plan.

Future? A top-tier medical school.
Dad? Avoid him as much as possible (which isn’t that hard considering he’s a congressman and he’s never around).
Friends? Palmer, Bri, and Toby – pretty much the most awesome people on the planet. Who needs anyone else?
Relationships? No one’s worth more than three weeks.

So it’s no surprise that Andie’s got her summer all planned out, too.

Until a political scandal costs Andie her summer premed internship and lands both her and Dad back in the same house together for the first time in years. Suddenly she’s doing things that aren’t Andie at all – working as a dog walker, doing an epic scavenger hunt with her dad, and maybe, just maybe, letting the super-cute Clark get closer than she expected. Palmer, Bri, and Toby tell her to embrace all the chaos, but can she really let go of her control?

When we first met Andie, her summer (and her life!) is perfectly planned out. She knows where she’s going and how to get there. So watching her summer plans fall apart was fascinating. Her reaction to loosing her summer programs and learning that she was staying home with her estranged father was entertaining to say to least. It was endearing as well. It’s those moments when you lose everything that we really see what you are. She’s smart and strong and driven. I really liked her pretty quickly and you can’t help my empathize with her situation. She’s really being punished for something she had no control over and she’s forced to deal with that reality.

I loved Clark pretty much upon arrival. The big, fluffy dog and cute, nerdy looks and I’m eating out of his hand. Add to that the fact that he’s bookish and I’m surprised I didn’t immediately melt into a swoony puddle on the floor. He’s almost perfect as a leading man.

I really enjoyed the dog-walking aspect of this novel. I love animals and it was fun to watch Andie connect with so many different dogs and really learn how to care for them. I also like watching someone else fan-girl out about a book. When Andie finally gives in and listens to a particular audiobook for the first time, she falls in love with the world. There is a scene in the book where she’s listening away whilst walking the dogs that made me happy because I was walking around listening to her story on my headphones while she was walking around listening to someone else’s.

I did have a few problems with this. Most are trivial, only one being a “real” issue. The first one is a rather trivial one, but it pulled me out of the story nonetheless. When we first meet Clark, he’s wearing a Star Wars shirt. I think it said “These are not the droids you’re looking for,” but I’m not positive. Regardless of the actual saying, all of Andie’s friends were overly impressed with this fact. As if this sets Clark apart from the rest of all the teenage boys when half the teenage male population is probably wearing a Star Wars t-shirt at any given moment. The other comment about that particular comment is the fact that Andie didn’t recognize this saying but later references Yoda. Now I’m not expert on anything Star Wars because I’ve never seen any of the films, but even I recognize basic quotes that are scrawled everywhere. You can’t recognize one and not the other. Also, they make several Clark Kent references but never once made a Bruce Wayne one. Am I the only one that noticed our swoony hero’s name is just the two big superheros pushed together? My other issue was a bigger problem. Without getting spoilery, let’s just say one of the characters pulls an Edward and leave it at that.

This was my second Morgan Matson novel. Everyone is gaga over her books, but I was underwhelmed by Second Chance Summer. It’s not that it was bad, it just wasn’t this amazing thing that everyone makes it out to be. So this was me giving her another try. I was pleasantly surprised by this second attempt. I don’t think she’ll ever be my favorite author, but I’ll definitely check out more of her work.

Audio Notes:
Bailey Carr does a pretty great job here. She has great pacing and good character differentiation. I’ll definitely keep an eye out for more of her work in the future!